Many owners still have the practice to keep their donkeys tied up by their feet when they leave them out on the fields to graze during the day.

This could be dangerous and accidents do happen.The following story is example of such a case where the donkey was tied up and left unattended for too long.

One morning we received a call to help a donkey in critical condition. When we arrived we saw the poor animal lying in pain on the ground under the sun without any shade. The owner said that the donkey has been in that condition for a week. A week ago he had left the donkey tied up by his foot for the day to graze. Unfortunately while the donkey was moving the rope dug deep into his rear left foot just under the pastern joint. It was so tight that the blood circulation stopped, which caused the loss of his hoof and brought the animal enormous pain that made him lie down, helpless. It took us weeks of therapy to see any improvement. Now on some days he looks fine walking alone, but on the next day you can see him having problems to keep standing, appearing dejected and depressed.   We are still very concerned and cautious about his recovery prognosis but we hope for the best. 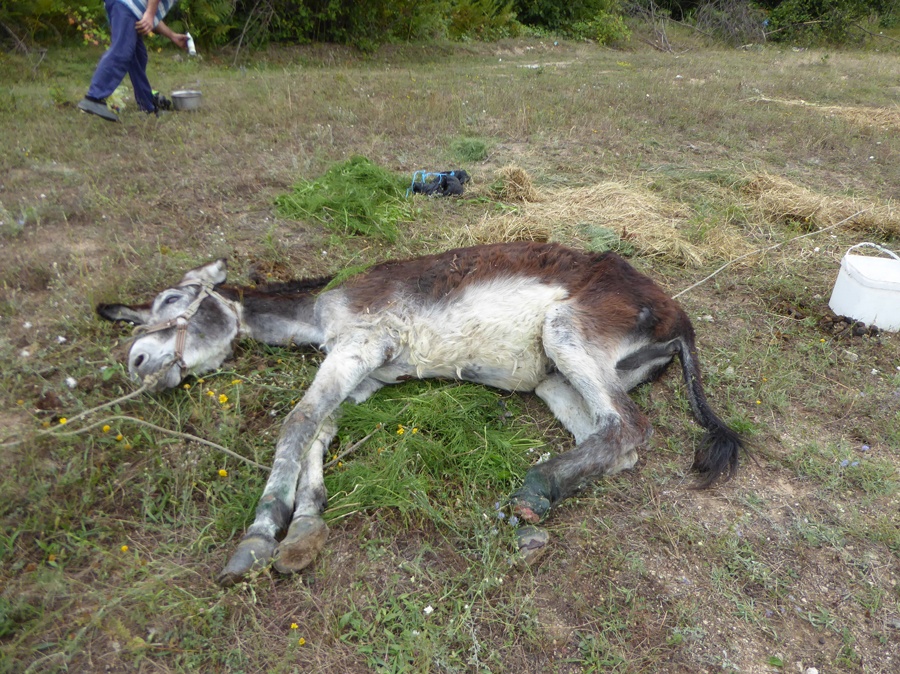 The donkey lying in pain, helpless on the ground. He is left in this condition for a week before we are called for help. 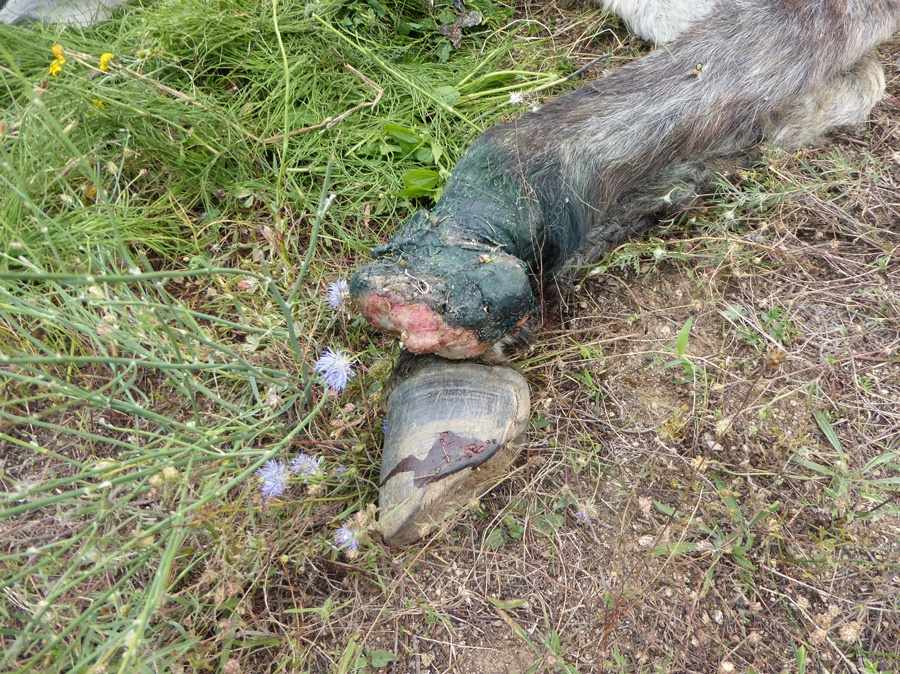 The rope is tight and the result is severe damage on his foot with the subsequent loss of the hoof. 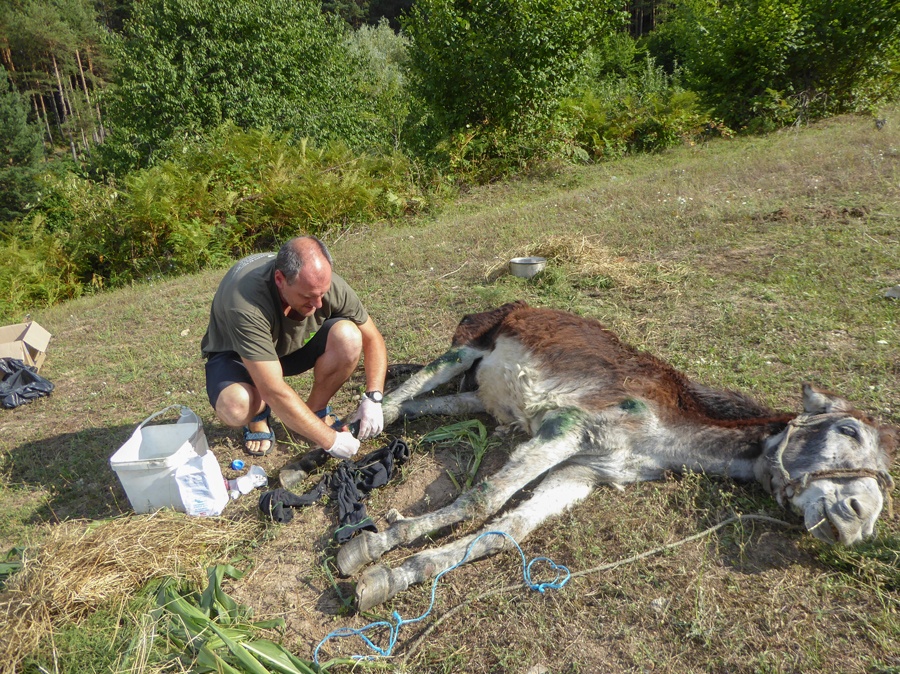 We start with therapy immediately on the site. First, we give him a strong painkiller to give him relief and next we bandage the wound. 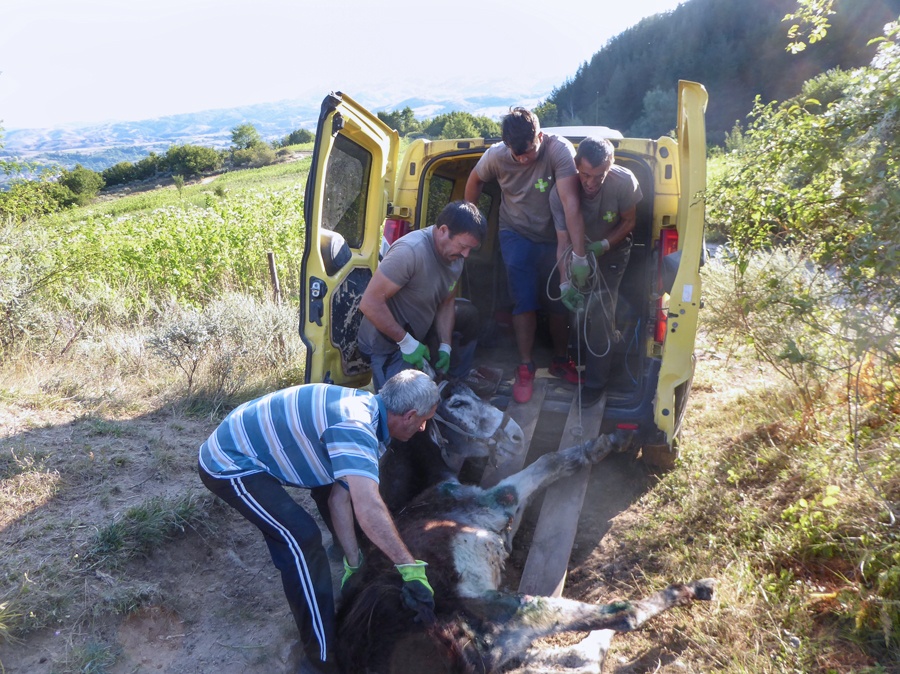 It is clear that the poor donkey can’t stay on the field in this condition. We organize transport to our rescue center to continue the treatment. 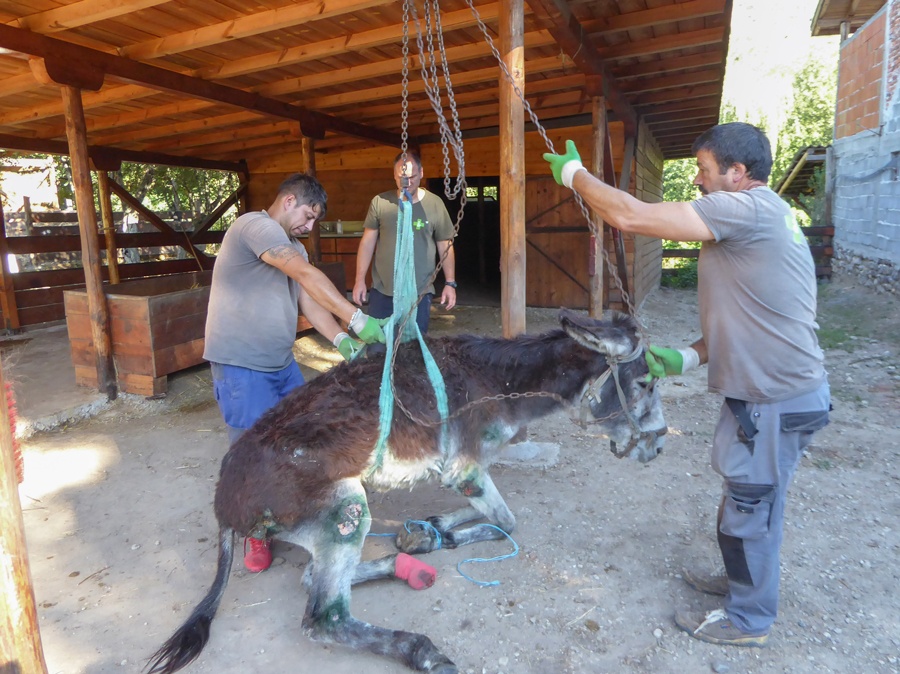 In our rescue centre, we have to use a belt to make him stand on his feet. He starts out by staying upright only for few hours a day, because of his bed sores and muscle atrophy that has developed during the time the animal spent immobile. 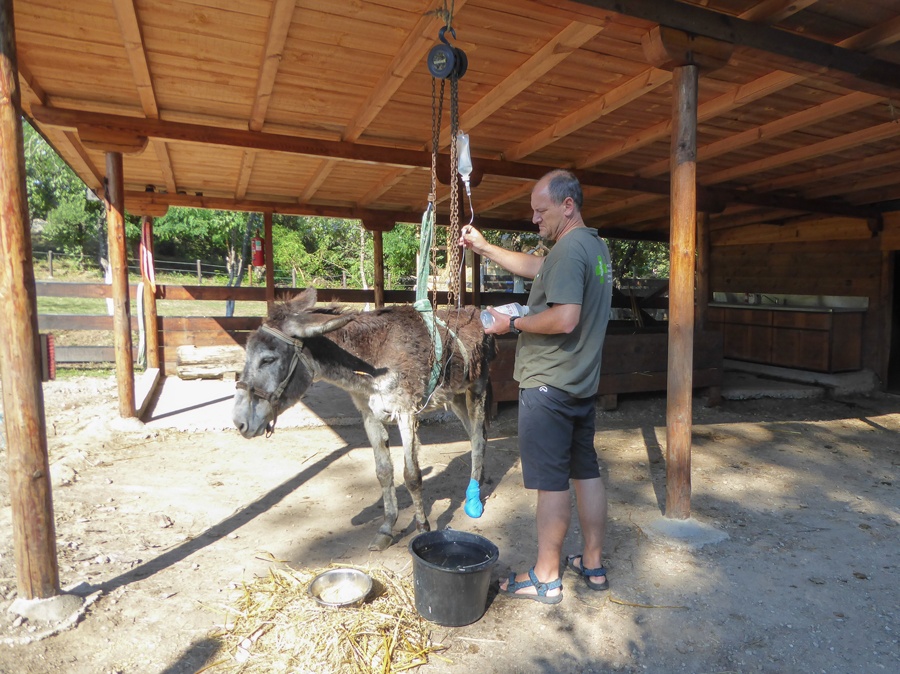 We start him on an antibiotic together with the painkillers and put him on drip because he is dehydrated. Good food and vitamins are also part of his daily menu. 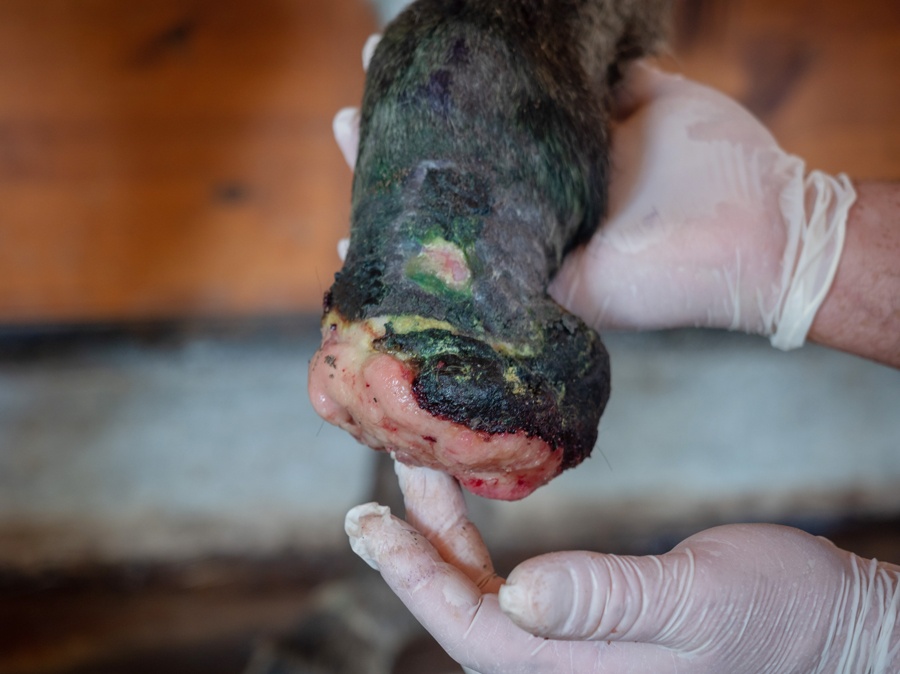 After a closer inspection, we see that the hoof corium has been severely damaged and we can touch the third phalangeal bone. 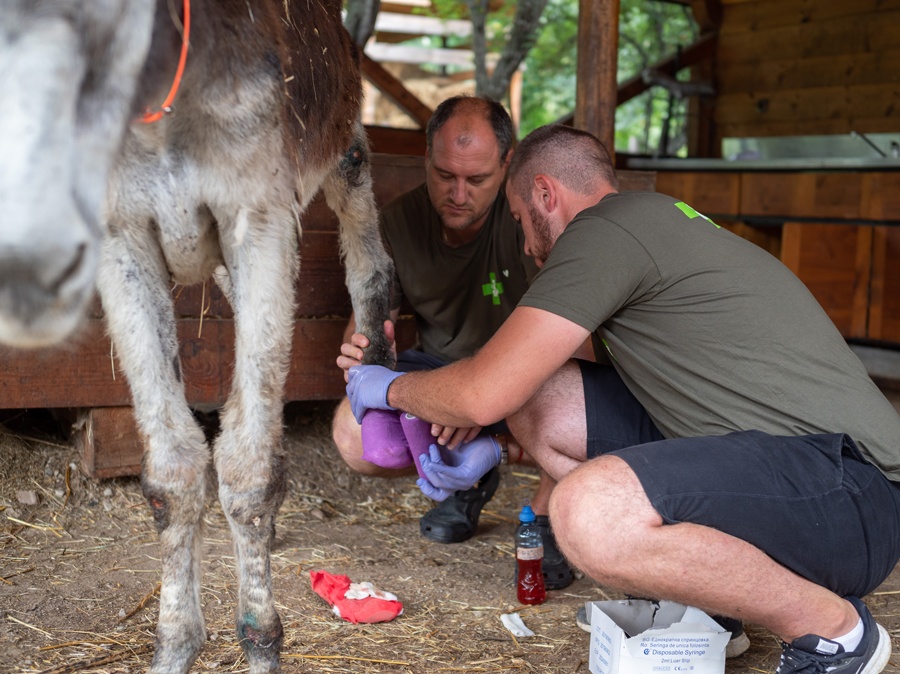 Daily bandages with remedies that stimulate regeneration are used in hope that the corium will start covering the open wound. Slowly results begin showing and the bone is covered with new granulation tissue. 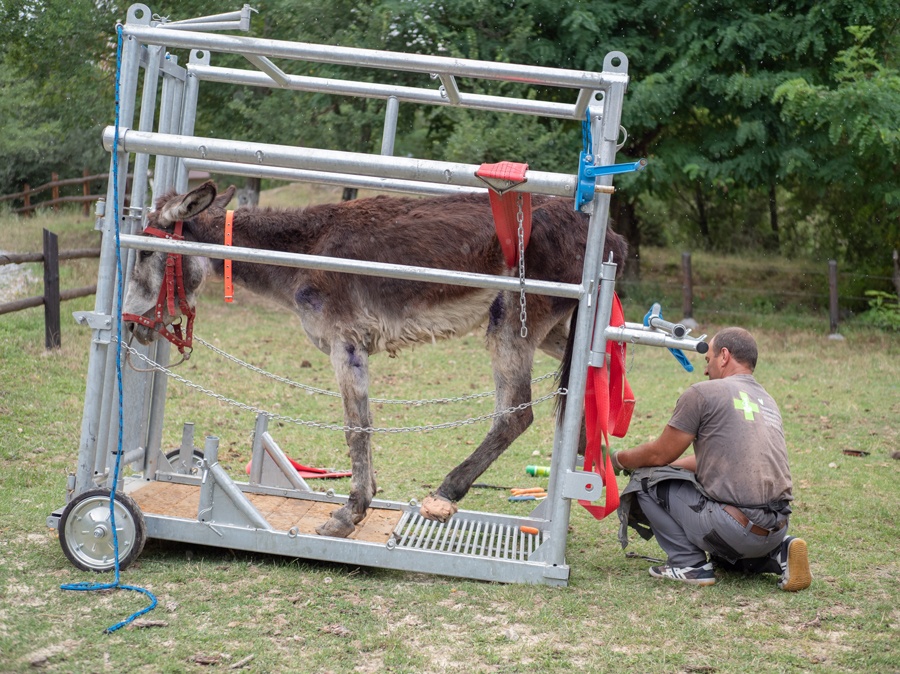 We also check the rest of his hooves, because they are in bad shape. 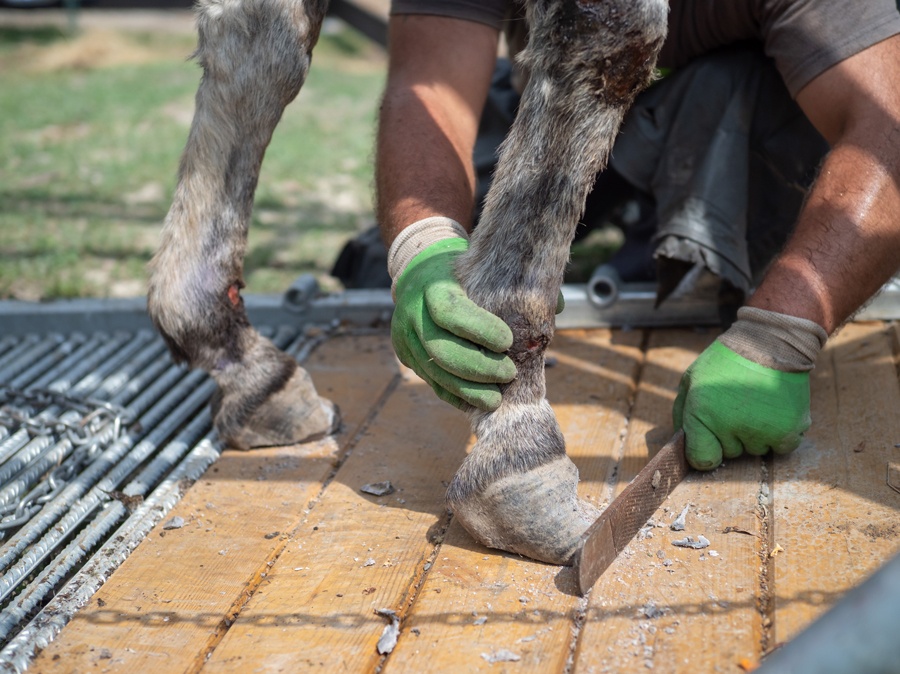 Trimming is provided from our farrier and the hooves are now well. 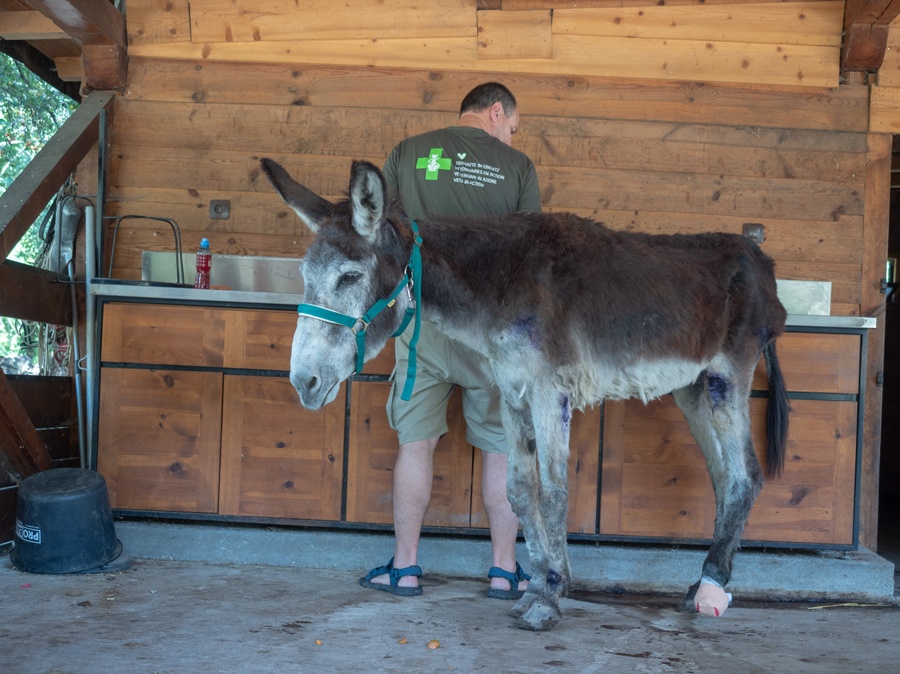 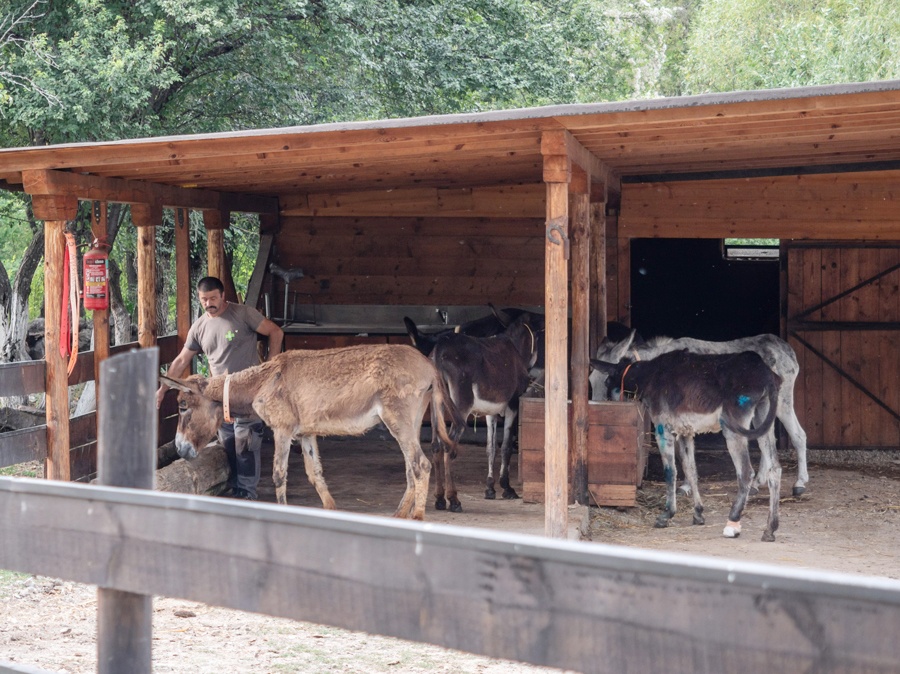 Kiril amongst his friends enjoying his meal. 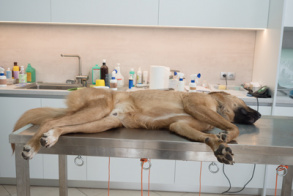 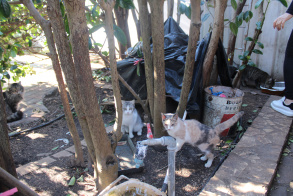 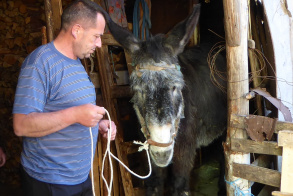